Bear's Guarana Soda - The Most Dangerous Drink from Hokkaido, Japan!! 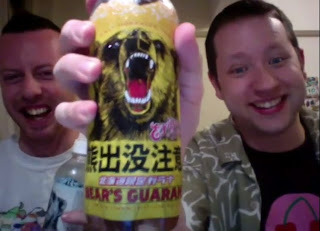 This is one of those wacky Japanese products that seems to come out of nowhere and makes very little sense, yet is essentially awesome! We found it on the shelves of the supermarket section of a giant Japanese department store in Hong Kong called Sogo and were immediately attracted by the terrifying image of the bear on the cover.

This wonderful creature is the famous Ezo Brown Bear of Hokkaido an iconic image for the people from this part of Japan. Presumably the promise is that if you drink this Guarana laced drink you will become as ferocious and active as the pictured bear.

The drink comes in two variations, the brown bear version as shown above and a second clear version with a picture of a white bear on the front, clearly described as being "not polar bear, but Ezo Brown Bear of Winter". This is what it looks like: 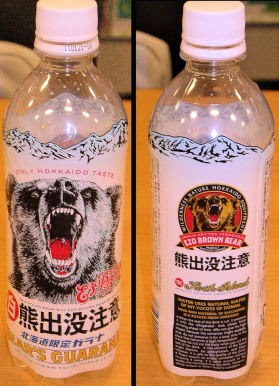 The back of the bottle is also filled with all kinds of interesting descriptions about bears and Hokkaido which essentially make no sense and on top of that the main ingredient for the drink according to the list on the back, seems to be a potato...

With all this entertainment one almost forgets about the drink itself, but it is actually very decent. Sweet, but not too sweet it is most similar to a mild version of an old school root beer mixed with a touch of bubblegum flavour. The white version, which is sweeter than the brown is more like slight bubblegum flavour mixed with Sprite.

Check out our video below for the full review:


Check out all our reviews of bizarre Asian snacks, foods and drinks here: Crazy from Kong!
And you can check out my blog here: Spencer Douglass Blog